Canadian company Tolko Industries, a leading manufacturer of a wide range of forest products for customers around the world, has a milling building at Meadow Lake. The cost of running the mill is about $4000/hr and because of continuous dust accumulation, the mill had to be periodically shut down so that the dust accumulation could be reduced to bring that plant back in good standing with safety compliance issues. The plant manager decided to install SonicAire fans to reduce the amount of time needed to manually clean the dust accumulation and to reduce the amount of time the mill was offline for cleaning. The SonicAire solution has allowed a more continuous level of operation saving the site money. 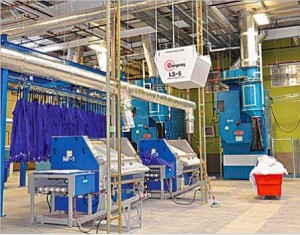 CHICAGO — Michael Reilly, president of Clean Cycle Systems in Seguin, Texas, got into the laundry and linen service industry about 30 years ago.

Reilly’s company manufactures lint collection and exhaust air systems for all types of laundries. Back then, he called on many laundry plants, and he didn’t see a lot in the way of dust and lint control.

“They would have lint collectors or lint filters on large dryers, big industrial commercial dryers,” he says. “That was common, but that would be the extent of it.”

The result? Dust and lint buildup in and on equipment, and up in the ceiling and rafters  … continue to full article